The mechanics of the ball out

There is some debate about the biomechanics of the ball out. Whatever mechanism acts doesn’t greatly change what the performer does in practice. All mechanisms try to explain why a good ballout achieves what it does. However for those interested in the “why’s” of the ballout. The following paper discusses the merits of each theory and proposes a third mechanism for a successful ballout. It also suggests that the timing and position of the leg beat relative to the body is critical in determining which mechanism is predominantly acting.

The traditional view is that the leg beat during the take-off phase, creates angular momentum in the legs that is transferred to the whole body by use of leg and stomach muscles. A newer theory is that the leg beat forces the shoulders into the bed which on returning creates an off centre force acting through the shoulders. This in turn creates angular momentum that creates the ball out. Critical to the success of this ball out is the use of the arms to push the shoulders into the bed as well as the timing and position of the leg beat.

Before starting a discussion on the mechanisms involved it is useful to describe the main characteristics of a technically excellent ball out as well as the elements of the human body that act to create rotational forces. Biomechanics in trampolining is often described as being the result of off centre forces acting on a single body. While this is useful it can be too simplistic. The forces created by the trampoline are predominantly down to up. The direction of the force applied by the trampoline, can be split by the body and this is done by redistribution of centres of mass (CoM). (fig 1).

Each body part has its own centre of mass and how that part acts, depends on where it is in relation to the other body parts. The position of the overall average CoM determines whether the trampolinist travels or gains from their base of support. Spotted rotation can only occur because the body is able to change shape. The only way an inflexible body can rotate is to receive a physical off centre force (fig 2a).

If the body was inflexible the only way rotation could be initiated would be to lean during the take off phase. A travelled or gained somersault would be the result (fig2b).

In somersaulting, the trampoline provides a more or less uniform centred force that is translated by the body into two forces. One that misses the average body CoM, but passes through the CoM of the bed contacted body part and another that passes through the average CoM creating the height for the somersault. So rotation occurs because different body part centres of mass are not aligned with the average CoM and the middle of the base of support fig 3.

For beginners, somersaults are initiated by displacement of hips that changes the relationship of legs to torso. For advanced trampolinists, large displacement of hips can be modified by emphasising displacement of the chest’s CoM in relationship to the rest of the lower body, by use of the arms. One shift in body position results in an equal and opposite shift in CoM so that the average remains constant and the body remains spotted. Because the spine is a flexible jointed structure, CoM can be redistributed about any of the joints. This can be the hips or any of the vertebra in the back or neck. The higher up this occurs the more the somersault will appear at “top”

The same principles apply in the ball out. What has changed however, is that the base of support has now become very large in relation to the overall body and the distance that the vertical body part can move has increased significantly compared to a foot landing. Also, whereas the vertical body can redistribute CoM easily by use of the flexible skeleton thereby creating off centre forces, the back landing is much more limited. Having gone through the basis principles of somersaults it is now useful to describe the basic characteristics of a good ball out.

The ball out can be described in two phases. These are as follows:

The ballout demonstrates many characteristics of trampoline biomechanics.

The first of the theories I intend to discuss is that of transfer of momentum. Here it is useful to distinguish between momentum generated by muscular action and that created by displacement of a CoM. The reason for this will become apparent later in discussion of the combined theory later. The main distinction is that the legs can be moved while over the base of support with very little effect on the average CoM for the whole body. If moved and stopped suddenly, momentum will be transferred from part to whole and the whole body will rotate around the average CoM. Because of the large base of support in the back drop, it is possible with very flexible performers to have the feet above the head in the landing phase, giving the possibility of a large leg movement while still above the base of support. Consequently, very little travel could result if the CoM of the legs remained above the average CoM when the performer left the bed. It is possible that this mechanism adequately explains the ball out. The timing of the leg movement could be at anytime in the bed as transfer of momentum will occur at whatever time it happens. However, the leg movement would be most effective as the bed nears the top.

The main elements that are missing as a sole explanation for “ballout” moves are as follows:

The first question is hard to explain based on transfer of momentum alone and suggests that the mechanism is more complex. The second question can be explained by the fact that the initial contact with the bed is on a smaller area and rotation of the body in the crash dive is not stopped effectively. A fuller, more rotated landing effectively kills rotation from the crash dive better. The main question with this mechanism is whether enough force can be generated from the movement of the legs to rotate the whole body without any other contributary forces.

The newest theory proposed to explain the ball out is that of action reaction. Here the leg beat creates an equal and opposite force that acts on the shoulders in the bed. It is proposed that this depresses the springs further and causes the springs adjacent to the shoulders to react by propelling the shoulders upwards. It is proposed that emphasis on landing on the upper body and pressing of the shoulders in to the bed by extending the arms backwards is critical to this process. While this explains the observed effectiveness of body landing and arm position, the timing of the leg beat would appear to be critical. For the springs to gain energy from a leg beat upwards the assumption must be made that the bed is on the way down or even more precisely just at the natural bottom of depression caused by the height of jumping. A leg beat after the bed has begun to return to the top would not produce extra energy to be returned via the shoulders and so should not increase rotation of the body. Furthermore for this action to result in increased rotation the shoulders would have to be at the centre of the base of support and this would mean that the performer was effectively standing on their head.

The main differentiation between the two mechanisms appears to be the timing of the leg beat. One assumes it happens as the bed goes down and the other that assumes a leg beat on the way up.

The final mechanism to discuss is a modified version of the transfer of momentum. This mechanism assumes that the mechanism discussed first will not supply enough momentum to the body for ball out or double ball outs to occur.

Here the basis is that movement of the legs induces a change of CoM for the legs along with transfer of momentum. While the CoM for the legs is above the average CoM no travel or rotation is initiated. As soon as the leg beat moves the leg CoM away from the average CoM both travel and rotation are initiated along with an additional transfer of momentum from part to whole at the “stop” of the legs.

The questions remain as before:

The answer to the first one is that having the arms back beyond the head extends the base of support and moves the average CoM further up the body. The CoM of the legs can now start higher up the body and move further past the average CoM therefore introducing more somersault without introducing significantly more travel. The answer to the second question is that the base of support is more rounded and shorter the higher up on the back the landing. So rotation from the crash dive can continue better. A lower contact also means that the body now behaves as two partially independent CoM’s landing at the same time and so there is less opportunity to introduce a differential (fig 4). Also the legs are already at the vertical position and so cannot be moved so far before the average Com moves outside the base of support and a high degree of travel is initiated. 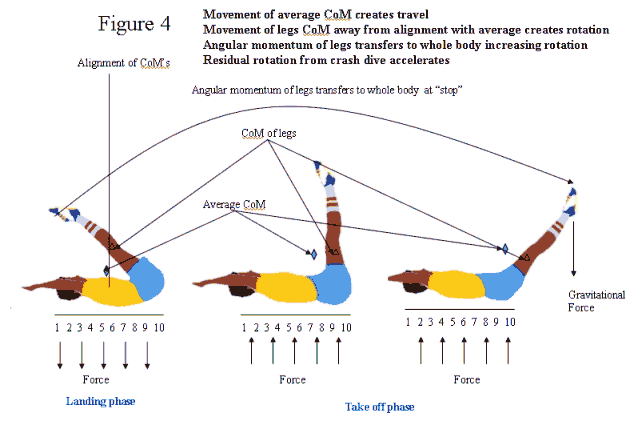 The preceding analysis suggests that the critical aspect for determining how good the ball out is, is how well the performer manages their average position of CoM. The degree of travel relates to the amount of displacement that occurs to the CoM of the legs relative to the average CoM. The distance of travel could be calculated from the angle between the middle of the base of support and the position of the CoM of the legs and the height of the jumping into the crash dive using simple geometry.